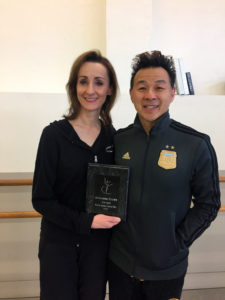 Menlo Park Academy of Dance is the recipient of numerous regional and national competition awards, as well as many studio awards recognizing “best technique” and “overall highest scores”.
In 2016 and 2017, Ms. Sarah-Jane Measor and her husband, Michael Lowe, were presented with the prestigious Outstanding Teacher Award by Youth America Grand Prix where many of her students have placed in the finals held in New York City (one finalist in 2015, two finalists in 2016 and 2017).